Modeling any experience inevitably involves modeling beliefs.  Whether you are modeling an experience of excellence or an experience of dysfunction and pathology, beliefs are involved.  They drive the experience.  That’s why every NLP modeling process that I’ve seen to date involves examining the beliefs that are involved in the experience.  We do that explicitly in Neuro-Semantics by examining the belief system, that is, the system of beliefs which make up the person’s matrix of frames about something.  Yet there is something more within complex human experiences- something that transcends beliefs.

“What’s beyond beliefs?  Isn’t it beliefs all the way up?  Isn’t that what you wrote in Meta-States and the Matrix Model?”

Yes, all of that is true.  From the perspective of beliefs, we could say that it is beliefs all the way up.  Yet when beliefs grow up, they become something more and something different.  So what do we have when a belief grows up?  We have knowledge, principles, premises, assumptions, etc.

This actually explains why we start with a principle or a concept when we do the Mind-to-Muscle Pattern.  We start with a general statement that is universally recognized by experts in a field as a legitimate and generalized statement, “Wealth is created by spending less than you make.”  And then we can turn it in to one or more beliefs, “I believe in spending less than I make.”  “I believe in earning more than I spend.”

When I first modeled wealth creation, I first had to establish some time parameters-how long does it take to create wealth as in financial stability, financial independence, and/or financial freedom?  Then I established the stages that a person would have to negotiate to reach these various milestones indicating different levels of “wealth creation.”  And as I wrote in the book, Inside-Out Wealth (2010, chapter 2) there are seven stages of wealth creation and for the average person this requires approximately ten years.  Hence, the reason we create in that book, and in the training, a Ten-Year Wealth Creation Plan.

From that arises the next question which is critical whenever it comes to any longer-term experience that a person has to persist in with constancy, regularity, and discipline,

“What do I need to hold as a higher level principle that will sustain me for the long haul?”

“What concept, principle, or premise do I need to set as my larger level frame of mind so that I can move through the various stages and steps within each stage, effectively and efficiently?”

What do the successful wealth creators believe about themselves as wealth creators, about wealth, about creating wealth, etc. that are expressions of an even higher meta-level frame- a principle or concept about wealth and one that sustains them over the years?  Consider these principles: 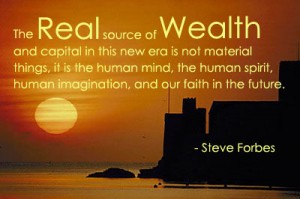 Because principles establish guidelines and rules for operating, once you set them as your frame-of-mind, they operate as a self-organizing attractor in your mind-body system.  And that’s why, in part at least, they represent such an important feature to model.  If you can interview in such a way as to elicit the functional principles in a person, you will be able to detect the dynamic structures that are so much more than just beliefs.  And this will give you a key to what enables the person to persist over time in making real his or her vision.