Discover the hidden secrets about NLP as exposed in NLP Secrets to get free from the distorting and deceptive mythologies surrounding NLP.  Secrets will give you new eyes for seeing where NLP truly came from, its actual sources, the people who have contributed to its success, and what it is truly about.   As Secrets pulls back the curtains, it exposes the shallow and false propaganda.  You will be able to hear the amazing Story for what it is.

With an investigative reporting point of view, Secrets boldly goes where no one has gone before— as it reveals 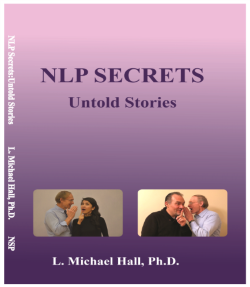 character flaws, unethical practices, and self-sabotaging activities which have given NLP its negative press.  Secrets also reveals the communication power of NLP—a power for precision, clarity, for modeling expertise, and for enhancing the quality of life.  In Secrets you will discover the shocking truth that NLP was not founded solely by two men, there was “a third man,” and there were communities of experimenters without whom it would not have developed.  You will discover that NLP was not a discovery of New Agers or 1970s hippies in southern California—it had roots in many scholars and disciplines— Bateson, Korzybski, Miller, Chomsky, etc.

Ready to be surprised and let in on some revealing secrets?  Then get ready for an emotional ride— surprises, excitement, discouragement, disbelief, anger, fear, love, etc.  They are all a part of the secrets within the story and the truths that today forges NLP as a Professional Communication Model.