Copies of the 3rd Edition of the Matrix Model have just been delivered to Neuro-Semantic Publications … and are available.  This completely updated version is in a newly sized book with a new cover. 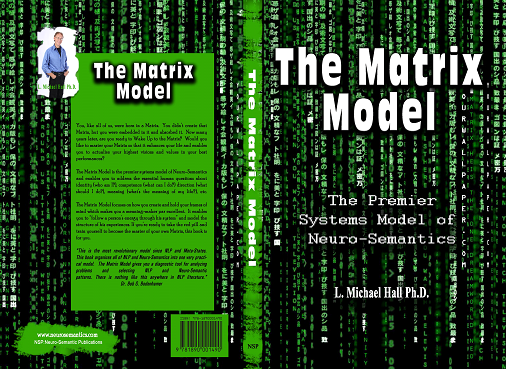 Back Cover of the book:

You, like all of us, were born in a Matrix.  You didn’t create that Matrix, but you were embedded in it and absorbed it.  Now many years later, are you ready to Wake Up to the Matrix?  Would you like to master your Matrix so that it enhances your life and enables you to actualize your highest visions and values in your best performances?

The Matrix Model is the premier systems model of Neuro-Semantics and enables you to address the essential human questions about identity (who am I?), competence (what can I do?) direction (what can I and should I do?), meaning (what’s the meaning of my life?), etc.

The Matrices Model focuses on how you create and hold your frames of mind which makes you a meaning-maker par excellent.  It enables you to “follow a person’s energy through his system” and model the structure of his experiences.

If you’re ready to take the red pill and train yourself to become the master of your own Matrix, this book is for you.

“This is the most revolutionary model since NLP and Meta-States.  This book organizes all of NLP and Neuro-Semantics into one very practical model.  The Matrix Model gives you a diagnostic tool for analyzing problems and selecting NLP and Neuro-Semantic patterns. There is nothing like this anywhere in NLP literature.”

For multiple copies, go to www.neurosemantics.com / Trainers / Pay a Statement:

$6 for each package inside the USA.

$34 for each package outside the USA.

“Men go forth to wonder at the heights of mountains,

the huge waves of the sea,

the broad flow of the rivers,

the vast compass of the ocean,

the courses of the stars,

and they pass by themselves without wondering.”

In the first of three movies on The Matrix, Morpheus opened the first one with these words to Neo:

Morpheus: “Let me tell you why you are here.  You have come because you know something.  What you know you can’t explain but you feel it.  You’ve felt it your whole life, felt that something is wrong with the world.  You don’t know what, but it’s there like a splinter in your mind, driving you mad.  It is this feeling that brought you to me.  You know what I’m talking about?

Morpheus: Do you want to know what it is?

Morpheus: The Matrix is everywhere, it’s all around us … It is the world that has been pulled down over your eyes to blind you from the truth.

Morpheus: That you are a slave, Neo.  Like everyone else, you were born into bondage, kept inside a prison that you cannot smell, taste, or touch.  A prison for your mind.” (Wachowski, 2000, p. 300)

This is the first conversation between Neo and Morpheus in the movie, The Matrix.   Wonderful science fiction—if you love sci-fi movies.  Yet it is more.  After all, don’t you find that there’s something strangely familiar in it to your everyday life?  Why is that?

I think it reminds us so much of our everyday lives because we also live in a matrix.  We also live in a matrix of frames.  Frames of mind, frames of reference, and frames of meaning.  These are alsoinvisible to the empirical eye and can only be seen by the eye of the mind.  I noted this in the bookFrame Games (1999) (now titled, Winning the Inner Game, 2007) which describes the cognitive-behavioral frames that we construct as we move through life and which become our framework for perception, behavior, feeling, skills, relating, and living.  It was from Frame Games as a model and as a training that I developed the Matrix Model.

Who is this Book For?

This book is for anyone who works with people and wants a model that will help to simplify the complexities that we humans bring to our tasks and relationships.  It’s for anyone who wants to more fully understand him or herself.  It’s for those who seek to influence people —teachers, trainers, therapists, coaches, parents, managers, leaders, people in sales, marketing, writing, consultants, business change agents, and law.

It is especially for those who know and use Neuro-Linguistic Programming (NLP) and Neuro-Semantics as part of their tool chest of effective patterns and models.  I designed the Matrix Model originally to serve as an unifying framework for tying together all of the models, insights, principles, and tools of NLP and Neuro-Semantics together.

The Matrix Model is for anyone who wants better self-understanding, self-management and self-leadership.  The model gives you a new way for thinking about yourself, your life, how you experience life, how you know what you know, and how others do the same.  The Matrix Model describes how you create the meaning structures of your mind-body system which, in turn, provide you with your sense of what’s real, at least what we call “reality.”  The model describes your mind-body experience in terms offrames and of multiple levels of frames.

The Origin of the Matrix Model

The Matrix Model emerged in my awareness in the winter of 2001-2002 and represented at that time the newest model in Neuro-Semantics after the discovery of the Meta-States Model in 1994.  My colleague, Dr. Bob Bodenhamer, elicited much of this model from me while we were doing a month-long training in Sydney Australia.  For many evenings, we worked out many of the details over dinner.  How did Bob elicit it from me?  It’s actually a funny story.

“Michael, how many things do you never leave home without?”

He was serious, well, okay semi-serious.  But I wasn’t.  I said, “Seven things I never leave home without, Bob.”  He wanted to know what they were.  That off-handed comment was a joke in which I made up the number on the spot.  Later over fish and chips he pressed me about it.  “If there were other constructs that you’ve created that you— that we — never leave home without, what would they be?”

That question sent me on a year long study of the basic principles in human development.  Via the research in the pioneer thinkers in the field of Developmental Psychology: Piaget, Erickson, Fowler, Keagan, and others, I constructed The Matrix Model using five categories of the Self: Self (Self-Esteem or value), Power (Self-Confidence), Others (social self), Time (temporal self), and World (our universes of meaning).

Afterwards, I presented the Matrix Model in many places—Moscow, Mexico, London, and Johannesburg, South Africa, etc.  then, even though my understanding was still rudimentary, I rushed the first edition to print to put it into the hands of Neuro-Semanticists and NLP practitioners.  I did that primarily because there were so many colleagues who wanted to begin using and learning this structure for modeling the mind-body system.  They recognized that The Matrix Model would give them an efficient and effective way to think about working with the human system for change, empowerment, and transformation.  Bob created a PowerPoint presentation of it for our website and Tom Welch, Sr. made a video-audio recording of one of the early presentations.

The Structures and the Sources of the Matrix Model

As a psychologist I stand on the shoulders of many giants who have explored and charted out the territory of human “nature” and functioning before me.  I developed the three process matrices within the Matrix Model mostly from Cognitive-Behavioral Psychology, Cognitive Linguistics, Neuro-Linguistic Programming (NLP), General Semantics, and the Meta-States Model.   Within it you will also see pieces derived from Glasser’s Reality Therapy and Control Theory and Frankl’s Logotherapy.  The five content matrices came from both Developmental Psychology and Phenomenology.

While this extensive theoretical background of The Matrix Model might imply that it is complex, the model actually is very simple.  In presenting it around the world, I have found that even those brand new to Neuro-Semantics easily pick up on the structure with an understanding that allows them to begin using it immediately to transform themselves and others.

In rushing the first edition to print I knew that there are many unfinished parts to the model.  I also knew that it would be in turning it loose and giving others a chance to bring their knowledge, competence, background, and experimental use of the model that would detail out other facets of the model.  That is precisely what has happened.  For the second edition I was indebted to so many for the questions, suggestions, and experiences that hundreds of people offered.  Yet it was not really completed with even that edition.  There’s more research and development that will be made to The Matrix Model.

To Best Learn this Model—

Sit back and read through the entire text to get an overview of the Matrix Model without worrying about understanding every detail or facet of the model.  When you have a general sense of the structure, then use that to first apply the model to one of your own experiences.  This will allow you to discover and explore your own Matrix of frames.  Thereafter you will be ore skilled to use it in communicating, negotiating, coaching, managing, doing therapy, leading, etc.  Because this is an evolving model, I am interested in your comments and experiences.  May you find yourself becoming a Master of your Matrix.