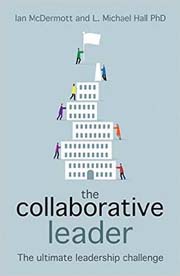 The idea of collaborating on collaboration started with a question to Shelle Rose Charvet about how a previous book, Innovations in NLP (2011) came about. Shelle and I had put that book together within a six months time frame as we brought together two dozen trainers and researchers in the field of NLP. The result was the first truly collaborative work of diverse people in the field of NLP. That had never before occurred. Later, Shelle was talking about this with Ian, and an idea arose between them, “Why don’t we model collaboration?” Shortly thereafter the three of us took the next eight months to interview and model each other. Our design was to discover how each of us have been involved in collaborations with various people over the years.

Most collaborations, if not all of them, requires a catalyst—someone to bring people together around a compelling idea. That’s the role that Shelle played in The Collaborative Leader (2016). Then, as sometimes happens in collaborations, life’s challenges in her life required that she step back. When she shared the details and the motivating factors for her regarding why she needed to step back, both Ian and I both knew that it was the best thing and fully ecological for her. So she did.

That left the two of us (myself and Ian McDermott) to either continue or drop the project. Actually, it really was not an issue for either of us. We both cared about collaboration and thought that the modeling that we had begun had already produced valuable information. So we were both committed to continuing. The next steps involves several things— doing a literary search of the subject, thinking through what we wanted to say, the audience that we wanted to address, etc. In the process we tapped into several keys about collaboration—one being to recognize and utilize each person’s strengths. To that end, Michael did the literary research and Ian formulated that a significant contribution would be to address the subject of the collaborative leader—as the ultimate expression of leadership.

Yet given that we are both busy with trainings, coaching, writing, and living our lives, and the fact that we are seldom “home”—we experienced one of the key challenges of collaboration. Namely, how do two busy persons find the time, or make the time, to collaborate on an important project? We did so primarily by Skype conference calls. Ian would be in London or in Connecticut and Michael being in Colorado or elsewhere around the world. Ian’s style involved pacing the room, reflecting, presenting ideas, challenging ideas, Michael’s style involved catching the ideas, getting them written down, asking questions, challenging, etc.

Eventually over the next couple years (yes, years!), the book came together. During that time, we presented much of what we were discovering at the NLP Conference in London and that helped also to solidify our thinking about what it takes to be a collaborative leader. In our opinion, the ultimate leadership challenge is that of being a collaborative leader. Why? Because the historical tradition has always focused on the singular leader— the independent person who stands out as a leader.

In today’s world with things changing, the individual leader is less and less able to make things happen. Today most organizations are led by a leadership team and for that to be effective, it requires collaboration.