“Meta-States will be the model that eats NLP” wrote Dr. Graham Dawes in 1996 in a book review of Dragon Slaying. That statement was published in Anchor Point in the USA and Rapport in the UK, later it made its rounds in NLP World.

I still remember the shock that I felt when I first read that statement in the book review. Actually I was utterly shocked by the statement. That was a statement that I had never even entertained, I had not thought of Meta-States in that way. And given that it was presented so bluntly, I felt confused at first. Having not been my radar, I didn’t know how the Meta-States model could have consumed NLP.

That was 1996 and here it is a decade later, and I have to admit that Graham was more right than I ever suspected. Since his 1996 review of Meta-States, the Meta-States model has indeed almost eat up and consumed the NLP model in numerous ways. During the years in which this took place, I was mostly unconscious of it. Yet in review, I am able to take a broader perspective and to see the revolutionary effect of Meta-States on the original NLP model and domains. 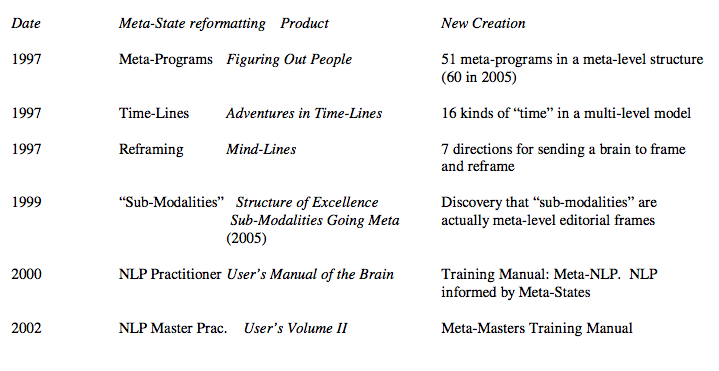 None of these books or training manuals were set out in some futuristic Mission Statement as to what we would do in Neuro-Semantics to “eat up the NLP model.” And yet that is what essentially happened over the years. I did not know it at the time, it is only in looking back does that become evident.

At the same time, I was writing a series of articles as critiques of NLP. Some of the articles I wrote by myself and some of them I wrote with others. One of the first was “The Downside of NLP,” later I wrote an especially biting critique of DHE, “Ten Years and Still No Beef.” In all of them I attempted to address various problems in the NLP model as it had evolved over the years and to take NLP to a new level.

Yet through it all we discovered many things and began to distinguish what we were doing from NLP. What we have discovered? One of the things that we mainly discovered is that a large portion of the magic of NLP occurs above the representational level. Now, the representational level is indeed the genius of NLP. It is a genius and contribution that we readily recognize as the unique creation of John Grinder and Richard Bandler. What NLP does best and what NLP is mostly about is representation. That is, it is about what and how we represent information on the theater of our minds and how that some simple shifts can generate very powerful results.

In this, NLP is truly magical. As a cognitive psychologist, when I found NLP I immediately knew that it filled in the gaps of Cognitive Psychology, Rational-Emotive Therapy, and of Reality Therapy. That’s why I found it so compelling.

Yet while NLP is all about representation, we learned something unbeknowest to Bandler and Grinder. We learned that there was another part of NLP that created magic that actually operated at meta-levels, at meta-state levels, and that the founders and developers somehow never truly realized this. We learned that what we had found in the Meta-States model actually explained most of the so-called magic.

This is nowhere better illustrated than the whole mis-adventure into the so-called “sub- modalities.” NLP decided that the finer features of the various sensory representational systems were “sub” to the modalities and so thought and used metaphors about “going down” and probing to a sub-level to find the elemental particles of experience.

Yet these cinematic features of our mental movies, the qualities of our visual, auditory, and kinesthetic systems are not “sub” at all. As the features by which we edit our movies, they occur at a meta-level as one of our frames. Somehow the entire process of even detecting these features is discovered by stepping back and going meta. And when we discover them, we discover meta- programsandmeta-modeldistinctions. All these are strong indicators that the term “sub- modalities” was the problem and had mis-led us.

In all of this, the reductionistic approach of Bandler and Grinder that created NLP in the first place by identifying the “languages of the mind” in terms of the sensory and meta representational systems ultimately proved to be its own confusion. The result? There has been essentially nothing new produced within the basic NLP model in the past 20 years.

By way of contrast, Meta-States that originated as a NLP model and so recognized by the International Association of NLP Trainers has continued, year after year, to generate new models, hundreds of new patterns, new modeling of experts to create new training modules and programs, etc.

The meta-level states and frames of Meta-States explains why and how the mind-body-emotion system operates as it does and brought forth a whole series of new presuppositions for the field of NLP and which later established the presuppositions of Neuro-Semantics. “The person who sets the frame governs the game.” “Someone always sets the frame.” “Where there’s a game, there’s a frame.” And that will be the subject of our next Reflection.