The Matrix Model originated from the Meta-States Model.  It arose as a way to express what a “meta-state” is in a way that the average person could easily understand and use.  So instead of taking about “states,” I began talking about “the games” that we humans play out in our actions and talk. So where did that idea come from?  From T.A. (Transactional Analysis) and especially from Tom Harris (I’m Okay; You’re Okay, 1970) and from Eric Berne (Games People Play, 1965). People play “games.”  A game is a set of actions that you can see or hear and so a “game” is an external expression of something internal.

In T.A., the internal that drives the “game” is a “script”-an idea about something like one’s value or disvalue, or how something works, etc.  It’s a belief, understanding, decision, perspective, etc.  In NLP, following from Bateson, we call these ideas-“frames” (as described in the last article), so when we put these two things together, we have frame games. 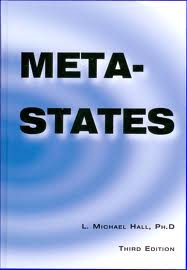 After the discovery of the Meta-States Model in 1994, I spend most of years from 1998 onward conducing workshops on Frame Games and then I wrote the book by that title in 1999.   (It now has a new title, Winning the Inner Game, 2007).  As I was modeling selling, writing, learning, business, relationships, etc. I titled those trainings and training manuals accordingly.

In these modeling projects I focused on modeling the frames that made the difference and not just the many micro-strategies that would occur within the larger subjective experience.  That is, if you consider great lovers, there would be many, many micro-strategies that they would use for the many, many activities that go into the larger experience of being a great lover. In fact, for every act of love (every loving act) there would be a strategy. Being supportive when a partner is discouraged, planning for some coupling time during the upcoming week, communicating about daily activities, etc. Yet above and beyond all of those strategies would be frames- self-organizing frames that would be the meta-states of the person that enables one to be a great lover.  These would be meta-states of benevolent good will, extending oneself for the benefit of another, patient resilience, forgiveness, magnanimity, etc.

The more I worked with frames (meta-states) and the games (behaviors, languaging) that resulted, the more I talked about “never leaving home without my state, my self, my meanings, my intentions…”  Then the day came in Sydney Australia (2001) when my business partner, Bob Bodenhamer, asked me how many things that I never left home without.  Only know 3 or 4, I said seven.  That led to a discussion of frames, an extensive revisiting of Developmental Psychology, and eventually to the creation of the Matrix Model (2002).  This model combines the processes frames whereby we create our sense of reality (meaning, intention, and state) with the content frames of self (self-value, powers, others or relationships, time, and world) of how we experience ourselves in the activities of life.

Then in 2002, Bob Bodenhamer and I had the opportunity to model a human experience that many find intensely painful-stuttering. I had written one or two articles about what General Semantics had discovered about stuttering and then some people who stuttered contact Bob asking him to work with them to deal with their stuttering.  That led us to the very first application of the Matrix Model as we sought to understand stuttering in terms of the seven sets of frames in the Matrix and how those frames are grounded in the state of stuttering.

Now in using the Matrix Model to model you have to shift from linear thinking to systems thinking.  The first thing that means is to forget one-thing-happening-at-a-time and anticipate that while one thing is happening, other things are simultaneously happening.  Bob and I started with the trigger.  What triggers the experience of stuttering (or blocking)? Ultimately we discovered two key things: authority figures and girls (90% of stutterers are boys!).  So what’s the frame?

Of course, with meaning frames like those, no wonder dysfluency (mis-speaking a letter or repeating a letter) is semantically loaded with lots and lots of negative emotion!  And if that’s the “game” played, then of course a person will try very, very hard to not mis-speak.  Now we have the Matrix doing something else.

In the person’s power matrix, as the person tries to stop a natural process (speaking and being dysfluent at times, which is true of everyone), one then discovers that one cannot (like “trying hard to sleep” which we are also powerless to do, that only creates insomnia!).   The person then discovers that he is powerless and helpless.  And that means – I will always be inadequate and rejected (time) in every domain of life (world).

And all of that goes on simultaneously and in a way that sends a person in a spin, round and round, so that as the negative meanings layer on top of each other, the person’s state gets worse and worse.  All of this gives us a structural understanding of how to create a good case of stuttering.  It enables us to model the how of how.   That is, how does a person right now in this or that context induce a stressful/ fearful state so that one elicits dys-fluency?  What meanings does a person have to be operating from? And, of course, if we know the process, the how that a person does something, we are in an ideal position to know how to interfere with that process or to preframe it so that it becomes irrelevant.  For more about this, you can find some articles on Stuttering on www.neurosemantics.com and for the full modeling of the structure of stuttering and what to do to master the stuttering, see Bob Bodenhamer’s book, I Have a Voice (2011) (originally titled, Mastering Blocking and Stuttering with NLP and Neuro-Semantics, 2004).