We know that you as an individual have lots of potentials which are not identified, developed, and unleashed.  The same is true of groups.  It is true of most organizational boards, it is true of most departments, it is true of most associations, it is even true of families.  In fact groups of people not only have all of the untapped potentials within each of the individuals that make up the group, they also have the systemic or gestalt potentials that could potentially come together to create more intelligence, more productivity, more learning, higher level performance and spirit than merely the sum of the parts.

Leading thinkers in organizational development, management, leadership, coaching, and business have noted for years that most groups inside of organizations are not only not producing their highest and best—they are dysfunctional.  They are operating at a level lower than the combination of the parts.  They are actually limiting and diminishing the possibilities of the people within the organization.  It is the rare and unique organization that is able to identify, develop, and release the potentials of their people and even more rare for an organization to be truly a self-actualizing organization in that they identify, develop, and release the potentials of their groups and teams.

Why the Focus on Group & Team Coaching?

Why?  Margaret Mead expressed it best when she described the power and potential of groups:

“Never doubt that a small group of thoughtful committed citizens could change the world.  Indeed, it’s the only thing that ever has.”

Further, every business is, by definition, a group.  Therefore the success of every business is dependent upon the effectiveness of how people “group.”  Do they know how to form and operate as an effective work group?  Do they know how to communicate openly, clearly, and efficiently?  Do they know how to develop the right attitude as a team member?  Do they know how to work through problems together?  Or are they plagued with the common dysfunctions of groups: competing with each other rather than collaborating, keeping secrets, playing politics, undermining with gossip and negativity, etc.?   Most groups are simply not effective.  Time is wasted in the groups going over petty and superficial issues.   Time is wasted on meetings that are irrelevant or boring.  Those leading the meetings don’t seem to know how to effectively lead them, inspire people, coordinate activities, and bring out the best in every contributing member.  That’s the bad news.

The good news is that groups can become highly effective teams.  It is not an easy or quick solution, but the solution is available for anyone who wants to learn the core competencies that are required. If people can work together effectively and efficiently, the business succeeds in productivity and profit.  If not, the business may not even survive.  The benefits that result from having effective groups and teams are many: smoother coordination of efforts, greater precision and clarity of communication, so less mis-communication, greater creativity and innovation, increased sense of responsibility, the synergy of people working as a unified team, improved team spirit, sense of pride in being part of a winning team, and so on.

To address the fact that most teams are dysfunctional, our focus is to facilitate effective group development by identifying the individual psychology of group members, then the group psychology that shows up as group dynamics, then the actual skills a leader or group coach needs.  These skills involve both the developing of the group and the trouble-shooting of the problems that undermine the group.  The list of group coaching skills (which are all leadership skills) include the seven core skills that we train in Meta-Coaching: Active Listening and Support, Deep Exploring via Questioning and Meta-Questioning, Mirror via Receiving and Giving Feedback, and State Induction.  To these we add: Framing, Group Functioning, Group Leadership, Meeting Management, and so on.  The group coach/leader will have to know and be able to recognize the group communication dynamics, the factors which undermine and sabotage a group, the leverage points of transformation.

In managing group dynamics, the effective coach/leader has to be effective in challenging and confronting.  To coach a group of individuals to become an effective work group or further, an effective cohesive team requires coaching skills taken to a higher level of working with the structural processes whereby multiple individuals can learn to think together, learn together, decide together, and then act together.  This is the overall content of the GTMC Certification.  Currently we have a two-phase training

∙           Three Days of Group & Team Coaching Training.  The first days focus on group dynamics  —how a group forms, norms, storms, and performs.  How groups have to negotiate the twin-demands of group nourishing and group tasking.  How groups negotiate the trust spiral to move from a group of individuals to a work group and then to a team.  How groups handle conflict, deal with team dysfunctions, challenge group members, etc.  Plus lots of group experiences to try out the skills in actual groups.

∙           Four Days of Assessment in Group & Team Coaching.  The following four days is for those individuals who want to set for assessment and for those who want to watch, learn, and be part of the psycho-drama on the stage as members of groups.  We set up various scenarios and ask the coach/leader to handle the group during a 45-minute session.

We have just completed our first Certification for GTMC in Guangzhou China and will repeat it in Hong Kong, Mexico City, and other places in the coming months. 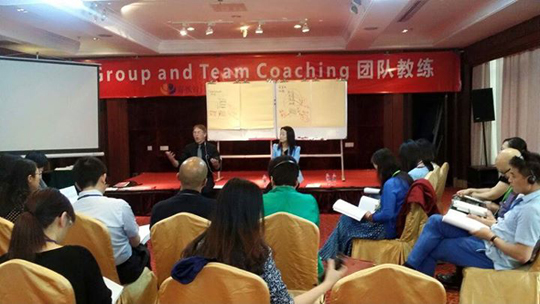